A long but satisfying day

It’s about 8 PM here, which means it’s 3 PM in Allentown. I have been running out of steam since this morning, when my flight got into Heathrow at 9 AM (we left Newark about 9:30 PM, and it was just under a six hour flight). I have been up since about 7 yesterday morning, EDT. As flights go, it was OK. I have had far worse flights to Europe, and really only remember two that I think of as better, and both of them, like this one, was on Virgin Atlantic. Seats are larger and far more comfortable, and the food is pretty good. The upgraded me to “more leg room,” but in the end, I don’t know that it was such a big deal. I got some reading done, Eric Voeglin’s Science, Politics, and Gnosticism. Reading on planes should be for pleasure or self improvement (Voeglin fills both those needs).

Customs was relatively quick, and I was on the bus to Oxford by about 10:30, arriving just after 11:30. I made my way to the office of the Oxford Study Abroad program, who gave me a key to a pleasant house 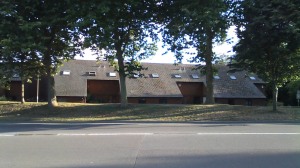 I shall be living in for the next two weeks. I finally got to the place. It’s clean, the bed could be nicer, but the biggest problem was no coffee pot. One of the fellows from the office told me about a place called Argos where he said you could find good stuff inexpensively. He was right. At first I couldn’t find it, and thought about going into the Evnomia House to ask them where it was (who would know better where Argos is?). If they would have asked me “So you think we would just know where it is?” I would have gotten to respond “Alethos!” But, I didn’t go it. I bought a coffee pot for about 7 £, and then I also bought a nice frying pan for the same price as the one in the house was ruined. I guess this is the cost for housing college students. There are also no sharp knives, which makes mincing garlic difficult (I will probably look for one tomorrow or else see about a simple knife sharpener). Both costs will be picked up by a grant I got to underwrite my research stay here. I love to cook, and cooking for me means onions, garlic and peppers, and you really can’t do that in a pot. Further, and I won’t get an argument from the Agora Institute on this, you can’t be an effective scholar without coffee. The other thing, which I had forgotten, is that the Brits don’t really put cream in their coffee (and they always do in their tea). So creamer to them is powdered milk. So, I bought some heavy cream and will dilute it with milk.

The accommodations are on the south side of old Oxford, about five minutes walk to High Street, and a few more to George St. I figure it will take me about 20 minutes to walk to Liturgy on Sunday. As a house goes, my room is fairly Spartan, but it has wifi, a good TV were I to want to watch a movie (which intend on not doing). Tomorrow I will get my reader’s card from the Bodleian, and start my requests so that Monday I can show up and start into those things I can’t really get at other places (and why I am in Oxford).

At the moment I have eighteen E.o.C. candidates (seven radicals, six Catholics, two Catholic humanists, and three libertines), and I am looking for at least two more, but may settle on these. They are quite a diverse lot, and unlike the F.o.C., who were united to Calvin by his vision of Reform, these all took after him on a multitude of grounds. I think I have over read on Servetus, and should just beat out the rest of the chapter tomorrow (it will of necessity be the longest, for so much of what some of the other radicals did was often following in his footsteps).

One of them, Bolsec, wrote a bio of Calvin in which he claimed, based on the testimony of another of my subjects, taht Calvin had been branded as a punishment for Sodomy in 1534. This now seems either a slander (Calvin was dead when Bolsec wrote this, and you can’t libel the dead), or a gross negligence on Bolsec’s part, in conflating two Jean Cauvin’s from Noyon. The only real question I have is about Thomas Stapleton, who is cited by some as also testifying to this, but I have yet to verify any of these assertions. Stapleton did spend a lot of time treating Calvin’s theology, and that will be covered, but on the question of sodomy, it seems a dead end. One of those things like Dante entering Hell: “All who enter here despair.”

I must finish my unpacking, make my bed, and shower before I retire, but I would like to go get a pint of bitter to end the day. Tomorrow, aside from the Reader’s card, I shall take some more pictures that I will post on FB. Generally I will stay away from FB, check it no more than once a day before I retire, but will post to the blog. I am eschewing sports and TV while here, and only have a few friends and acquaintances I am calling on. Two dear ladies in Allentown are sacrificing so I can be here and get this work accomplished, and I have no intention of disappointing them (even though neither will ever read what I wrote). I only have two other books with me apart from Voeglin. The one is Nikalaos Loudovikos’s A Eucharistic Ontology, a book I have begun and must finish. The other is on the wars between Ladislas of Hungaray and Murad II, which is a book review I need to finish. I counted them up the other day, and this is my fortieth book review.

Professor of History
View all posts by Gary Cyril Jenkins →
This entry was posted in Uncategorized. Bookmark the permalink.

6 Responses to A long but satisfying day